DevSecOps vs. SecDevOps vs. DevOpsSec: Is there really a difference in these secure DevOps terms?

We all agree we need to secure DevOps, but what should we call it? There are so many terms out there. Whether it is DevSecOps vs. SecDevOps vs. DevOpsSec, is there really a difference in these Secure DevOps terms? In this article, we will discuss the differences between each of these, and explain why SecDevOps is actually the correct security approach.

In previous articles, we’ve talked about the need and challenges associated with securing DevOps environments.

It’s a complex topic. At the root of the matter is the fact that it has to do with the overlap of the three main functions in any organization: 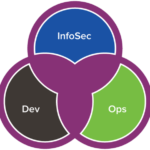 Clearly, securing DevOps is an important topic, and one that has the full attention of developers, InfoSec teams, CISOs, and almost everyone else in the industry today. Yet while we can all agree that we need to do a better job, there’s less agreement on the approach, which contributes to confusing terminology.

What should we call it?  Secure DevOps, SecDevOps, DevSecOps or DevOpsSec? And is there a real difference between the terms?

What’s in a name?

To help shed some light, we thought we’d take a closer look at three terms, see what they really mean, and show you which one CSPi prefers: 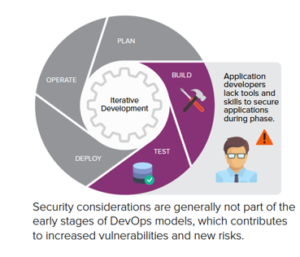 On one hand, we give this term credit for including security as part of its name. But this approach still doesn’t overcome the inherent conflict: Developers don’t have the simple tools, or skills to secure applications from the beginning, and InfoSec teams are potentially brought in too late to address security concerns.

As a result, DevSecOps represents the scenario we are in today – a situation where security doesn’t get the prioritization it deserves.

Such an approach is extremely risky to an organization’s critical assets as it’s a strong possibility that applications are put into the field unsecured or not fully tested. From an operation’s perspective, once the handoff occurs, they want the app put right into production, but security will likely be the block and cause inherent friction between the two functions goals.

It’s easy to release applications with the rationale, “We’ll patch as we catch bugs.” Yet from security’s perspective, patching simply can’t keep up. For example, the 2017 Equifax breach was caused by a missed patch on an open-source application.

Additionally, SecDevOps includes InfoSec teams as part of the development pipeline. This approach attempts to address previous shortcomings by automating and integrating security solutions are part of the core development process – and not as a clunky, “afterthought” function that may only disrupt the entire production process.

Where do we go from here?

Overall, it is a positive trend that the popular and beneficial DevOps model is now taking security into consideration. This is a big improvement from just a short time ago. It’s clear that security is becoming a top priority.

Security breaches keep happening, with no indication of slowing, and new stringent PII/PHI data privacy laws are coming online – like PCI DSS, GDPR and 23 NYCRR 500. We believe that the term “SecDevOps” will become the de facto standard as taking security into the account at the beginning of the development process will have the best results.

At CSPi, we are tackling the gap between application development and security head-on. Our ARIA Software-Defined Security (SDS) platform provides simple-to-use connectors ,which when applied insert the desired security features, without any additional coding.

This solves a couple of problems:

These two benefits alone are huge! Yet, ARIA goes one step further and gives InfoSec team the power to automatically discover and activate security policies within applications, as well as the data within or produced. Just think of the possibilities the speed and agility of DevOps paired with security built into development AND automatically enforced. This is definitely a win-win and SecDevOps is at its core.

Interested in learning more about SecDevOps tools, and what makes CSPi solutions different? Download our white paper, “How to Secure DevOps Across Any Environment,” view any one of our on-demand webinars, or contact us today.